I was made aware of a rockfall that occurred in Northern Italy recently, in the small farming village of Tramin.  A building, which appears to be a farmhouse, sits at the base of the cliffs from which the rockfall occurred….and paid the price. 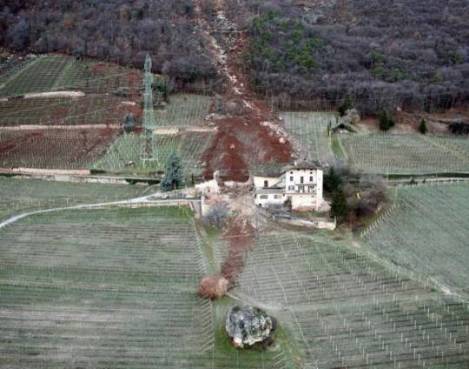 I wasn’t able to find much on the geology of the cliffs, but best guess based on the images/video and very basic information on the nearby Endkopf mountain, the cliff is most likely composed of limestone and/or dolomite (if anyone has some good information on this, I’d love to hear it!).  It is not uncommon for large boulders to break away along pre-existing joints that are made larger by freeze-thaw cycles.  The open joints subsequently fill with water, causing a surprisingly large force, which effectively “pushes” the rock out from the cliff (with the help of gravity). [UPDATE: Per David Bressan of SciAm’s History of Geology blog, the cliffs are composed of laminated Dolomite (see comment below)]

While boulders quite this large may not be extremely common, the owner of this building should have known better.  Why?  For starters, the boulder that tumbled right through the farmhouse came to rest just yards from an even larger boulder that was there before the place was even built!  You can see this is an older occurrence based on the fact that there is no “trail of destruction” leading up to the second boulder, as well as the fact that there are plants, including small trees growing on it! 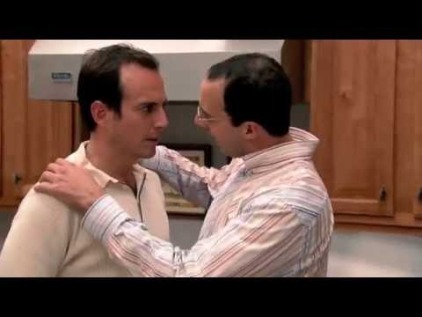 It didn’t sound like anyone was injured (thankfully), and scaling of the cliff face is set to occur in order to prevent similar incidents in the near future.  This method of “prevention” actually involves accelerating the process by manually breaking away any loose rock or blocks that may present a risk.  As with many rockfall hazards, including here in the U.S., it is not too often that mitigation occurs prior to an incident like this.  So it falls on the public to be aware of the potential for any type of slope instability when they are looking to buy a home, or even have a picnic at that great spot beneath the cliffs!

This video was recently made available on YouTube, and lends a great sense of scale. Thanks, to @AEGweb for bringing this one to my attention!

Additional information about the rockfall may be found in an article here and a great account with more images is worth a read on The Landslide Blog.

3 responses to “Rockfall in Northern Italy”