It is 4 years today that I created Adventures in Geology!  I’m simultaneously excited that this little project has lasted so long, and disappointed in myself for having largely neglected it for most of the past year.  I averaged only one post for every three months…not stellar by any means.

But it’s a new year! Both for this site and by the Gregorian standard of telling time, and so it is customary to make a resolution to improve over the course of the coming 12 months.  In this case, I am resolving to do a better job at “minding the store” and am setting a goal of one post per month (I’m telling you this in order to feel more accountable in keeping this resolution)!

I’m also resolving, on a personal level, to travel to more places.  For some time I’ve wanted a map to hang on the wall and pin the locations I’ve visited.  In a nifty twist to the standard map, I received this “scratch-off” map as a Christmas gift.  Immediately I began scratching away to reveal all the places I’ve been.  I included everything from vacations and conferences, to job sites, field trips and the drives in between (fly-overs don’t count!).

As I cleaned up all the scratch-off coating shavings, I realized I’ve been NOWHERE!  Now, I knew I was no world traveler, but I’ve made some laps around this corner of the world.  So I thought it would be a fun exercise and a great conversational piece (“Look at all the places you’ve been, Nate!”).  Instead, I’ve barely uncovered a fraction of the country I live in, let alone the rest of the world!  This truly lent a sense of perspective, and I want to make an honest effort to uncover much more of that map. 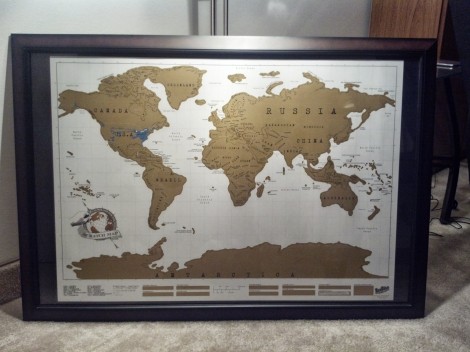 Scratch-off map with all my earthly travels. Such a sad thing…so far.

Obviously it’s very unlikely that any one person could reveal the entire map…especially if they scratch it off according to small areas vs. by country (as I believe the map was actually intended).  However, it’s sad to think that there are people that rarely leave their state or (like me) their own country.  There’s so much out there to explore!

This reminds me of something a friend and former coworker said upon my return from a conference:

Me – “Alaska was incredible! I can’t wait to go back!”

Cherri – “Why would you go back?  There are so many other places to see!”

She was right.  There’s a lot to be said for returning to a place you know to be beautiful, inspiring, relaxing and exciting all at once…but there are a near endless supply of new places that are out there waiting to make you feel the same way.

It is with this in mind that I plan to explore even more of the country I call home, and – with any luck – hope to travel the world!

My challenge to you: Travel to some place you’ve never been before, and be sure to tell us about it!

One response to “AiGeology’s Blogiversary! and a New Year’s Challenge”