Edit (3/4/13): If you’ve found this post through a search for information on the sinkhole that occurred on February 28, 2013 in Florida, please visit my more recent post: “Sinkholes – Where and Why They Form” (then come back and read this one!). – Nate

I came across a landslide story today, and was going to leave my comments to a simple Facebook status, but then started to write way too much and thought “Hey! I haven’t posted to AiGeology in a long time, this might make a good post!”  Now, this is hardly the epic story I should be writing after nearly four months of radio silence, but it’s a start.

Yesterday morning, a 150 foot section of Highway 89, the main transportation route between Flagstaff and Page, Arizona “collapsed” in a “geologic event”.  That event, based on the few images I’ve seen, looks like a classic landslide.  This article claimed otherwise.There were a few local news stories published…many very soon after it’s discovery by some unfortunate drivers (all three were OK, though I can’t speak for the conditions of their vehicles), so there is little information about the landslide.  Why did this this particular landslide catch my eye when they happen so often that you could create a whole blog about them?  Truthfully, I took notice because it was discouraging to see the word “sinkhole” used yet again in a news report about an obvious landslide.  Not only did they call it a sinkhole in the article, but right above the article’s companion video, featuring geologist Dr. Steven Semken of Arizona State who clearly says this is a slump or slide type failure, is the glaring headline “2 cars ensnared by sinkhole…” *twitch*

(Worthwhile video of the Hwy 89 landslide)

There’s a big difference between the two.  A sinkhole develops when a cavity exists beneath the ground surface, which eventually becomes large enough that the “walls” are unable to support the “ceiling”, resulting in collapse.  At the surface, a sinkhole has the appearance of a circular hole or depression.  Sinkholes are common in regions with karst geology – where groundwater weathers out cavities (caves!) in the rock; often times limestone.  They can also occur over abandoned mines or any other situation where you may have a cavity forming below the surface. 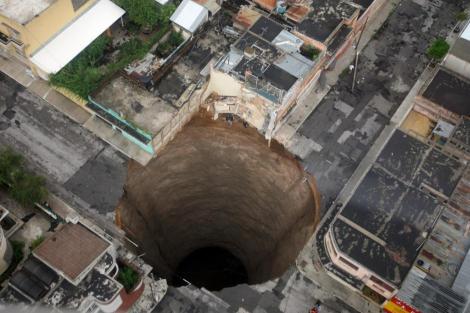 Guatemala sinkhole, 2010. Much larger and more “perfect” than is typical for sinkholes, but a prime example!  (Some proof that it’s real)

Landslides, on the other hand, are a type of slope failure.  They happen at the surface as a function of “driving” forces, such as the mass of the slope material, and a lack of proper support at the base, or toe of the slope.  There are many kinds of landslides and I can understand someone using the terms landslide, slump, rockfall, rockslide, mudslide, debris flow and several other categories of slope failures synonymously when describing such an event.  While technically incorrect, they’re all close enough to mean the similar results to the average person.  Why the distinction?  They each present distinct characteristics and, therefore, require different approaches for preventing and/or remediating…but that’s a post for another time.

For now, a landslide is the mass movement of soil and/or rock downslope under the force of gravity.  While a slope is clearly unstable at this point, there is usually a “trigger” that pushes it over the edge (excuse the pun) and causes the failure.  This can come in the form of a surcharge at the top of the slope (placing a building at the edge of a slope), removal of the toe or over-steepening of the slope (excavations/road cuts), or an increase in pore pressure.  The latter happens when water infiltrates into the slope, filling the pore spaces and exerting an outward pressure, literally pushing the grains apart.  This may not seem very effective, but when multiplied out over the volume of the slope, that’s a lot of pressure forcing the material outward, where gravity can then take over and pull the entire mass down slope.

These are very simple explanations, but I hope I’ve made it pretty clear that a landslide is not a sinkhole.

The reason it is so important to differentiate between sinkhole and landslide goes beyond prevention and remediation.  In the case of the Dover, Ohio landslide, which I also eluded to at the end of the third paragraph, it could mean the difference between whether or not someone is held liable for damages.

Here’s an aerial shot of the Dover landslide that occurred in November last year.  The lake was being dredged for sand and gravel for at least ten years prior to the failure.  When it happened, news reports claimed sinkhole – so did the asphalt company that did the dredging…obviously. 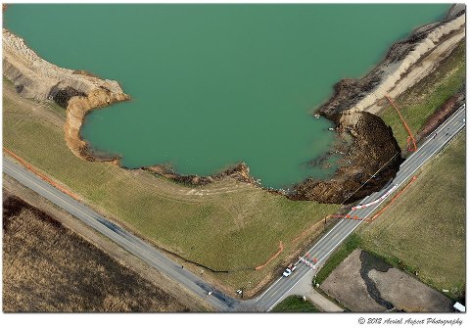 However, we’re not in a karst area here, and no underground mining has ever occurred at this location.  What’s more, this photo shows an example of a classic landslide complex (Those are some beautiful head scarps!).  The cause: dredging near the toe of the slope removed support at its base.  With no support at its base, the slope failed.  Simple as that.

For more resources on the US 89 landslide near Page, AZ, check out Lee Allison’s blog, Arizona Geology, where he has a number of posts detailing this landslide event.