The “Crown Jewel” of Custer State Park, is a lake located high above the South Dakota plains.  Sylvan Lake sits at an elevation of over 6,000 feet, and is one of many picturesque locales in the Black Hills. 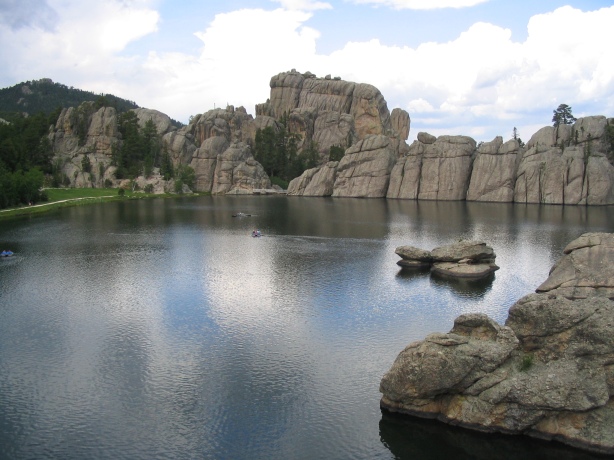 Nearby, are “The Needles” and the busts of four of our nation’s great presidents, aka Mount Rushmore.  All are comprised of granite from the 1.6 billion-year-old Harney Peak batholith (a large igneous body).  The joints that have formed in the rock allow weathering processes to round the edges of the granite, as you see at Sylvan Lake.  At the Needles, joint spacing is much closer, allowing for the magnificent spires visible along the scenic highway.  A higher quality granite, with less jointing, is what makes up Mt. Rushmore.

The Black Hills rise above the surrounding plains due to regional uplift that took place about 70 million years ago. Erosion of overlying sedimentary layers (sandstone and limestone) exposed the underlying igneous (Harney Peak batholith) and metamorphic rocks, which now make up the “core” of the dome-like region.

The above image is a (simplified) representation of the geologic structure of the Black Hills.  Hollis, author of the blog In the Company of Plants and Rocks, wrote a nice little post about this very image.  She also included a version with labels on the notable geologic units!

The Black Hills are full of interesting geology – many geology field camps spend weeks in this region alone. So if you’re at all interested in some exciting geology, or just some breathtaking scenery, I highly recommend a visit.

One response to “Friday Photo: The Lake in the Hills”