I have finally jumped on the bandwagon and am submitting my first “Accretionary Wedge” post.  Because this is my first submittal, and I presumably have some readers who know nothing about the AW series, I’m going to take a couple of sentences to explain.  The Accretionary Wedge is an online blog carnival in which fellow geoscience bloggers can submit their own posts to a common topic.  Each month or so, a new blogger “hosts” by suggesting the next topic and allowing contributors to post links in the comments to their own sites.  The host then presents all the submissions along with a summary, following some deadline.  A list of upcoming hosts and topics can be found here.

This has always sounded like a great idea to me and yet, somehow, I haven’t managed to throw in a submission.  No more!

This month, Accretionary Wedge #45 is being hosted by Denise at Life as a Geologist, who asked us to share our ideas for a geological pilgrimage of our own.  It would be some place we feel the need to visit at least once in our lifetime.  As she specifies – “a single place, which is “geologically” unique,  relatively remote, and requires some difficulty to get to.”

I’ve been to some really neat geological places, though mostly in national parks, which aren’t too difficult to get to (most of the time).  And I know there are more places than I can count that I have on my bucket list of “amazing must-see geology”.  However, for this, I wanted something truly unique.

After thinking for all of a few seconds, I remembered reading about Nyiragongo, a volcano in the Democratic Republic of  the Congo which holds in its crater one of only four persistent lava lakes in the world.  Now, Nyiragongo was covered by National Geographic  last year and, making assumptions, this must be one of the more spectacular out of the five.  Sure, I could visit one of the other three, like Erta Ale (Ethiopia), Mount Erebus (Antarctica), or Kilauea (Hawaii), but based on the stunning photography I’ve seen of Nyiragongo, I’ve been captivated.  Besides, I have to pick just one, right?  A trip to the others might be in order as a supplement to this pilgrimage. 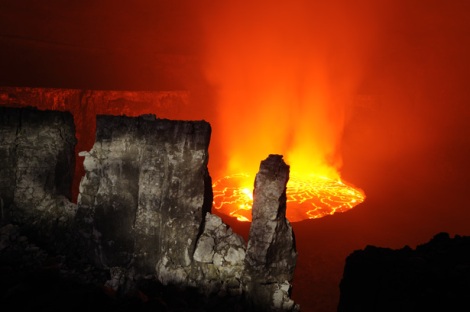 Oh!  That’s right, this is a geoblog!  So, I should introduce some interesting geology to the mix.  Well, I suppose it’s obvious that we’re looking at a volcano (or four).  We all know – to one extent or another – that a volcano occurs when molten rock (magma) reaches the surface and ‘erupts’ as lava.  A lava lake, then is simply lava that hasn’t left the crater of the volcano.  This actually happens often with mafic, non-explosive eruptions.  Why is Nyiragongo special?  Because not so common is a persistent lava lake, such as the one in Nyiragongo’s crater.  In other words, the lava here remains molten for an extremely long period of time…at least on the order of decades, but theoretically could be thousands or tens of thousands of years.

What would cause a persistent lava lake?  The best solution is that the lava actually does cool to solid rock, building the crater while new lava is slowly being fed into the crater from below, perpetually maintaining the glowing lake of molten rock.  This process is very rare, and the fact that we know of only four persistent lava lakes in the world and around 1,500 active volcanoes, goes to show just how rare.

Close-up of the lava lake. As lava is exposed to the air, it begins to cool into solid plates, which float on the lakes surface. (Photograph by Carsten Peter)

What has also had me interested is Nyiragongo’s alkali-rich lava.  This chemical composition is theorized to be what makes its lava flows so “runny”…some moving up to 60 miles per hour.  Runny lava makes sense, since the silica content is so low, and mafic lavas are known to be more fluid.  My question, though, is how the slopes of Nyiragongo are so steep (nearly 50 degrees near the top) by comparison to most mafic volcanoes, which have a more gentle, shield shape because of the fluidity of their lava flows.  I’m obviously not a volcanologist, and haven’t done too much research into this (believe me, if and when I go on this trip, I’ll be doing quite a bit), so if anyone has an explanation, simple or not, I always love to learn!

p.s. – Because I’ve never been to Nyiragongo to take my own photos, I’ve included some by Carsten Peter (National Geographic), for which I was given permission to use in a previous post.