Today’s post is an article I wrote for the June issue of AEG News, the quarterly magazine published by the Association of Environmental and Engineering Geologists.  The article, as you will read, briefly covers a field trip I attended early this year:

As part of Dr. Abdul Shakoor’s Advanced Engineering Geology class at Kent State University, I attended the field trip that he and his former student Dr. Brian Greene (Gannett Fleming, Inc., formerly of The U.S. Army Corps of Engineers) have been running for over twenty years.  During the two-day trip, our class visited four dams in Western and North-central Pennsylvania including three operational sites as well as a historic failed dam.  Students learned about the history of each dam while being able to see first-hand the geologic settings and topography that play a major role in site selection and construction of dams.  We were also given the chance to tour each facility, including galleries, control rooms and a hydroelectric plant.

The first stop was to Piney Dam, located on the Clarion River.  Piney is a 700-foot-long combination arch and gravity dam that was constructed in the early 1920s with the purpose of producing hydroelectric power.  Though it may have appeared old and crumbling, this dam was ironclad.  Its thickness alone is enough to withstand the combination of upstream water pressure and ice thrust, it gains additional stability through its massive arch which abuts against the rock banks of the valley.  Many other features were constructed to prevent failure of any type, including a spillway capable of discharging a flood over twice as great as any in recorded history along the river. 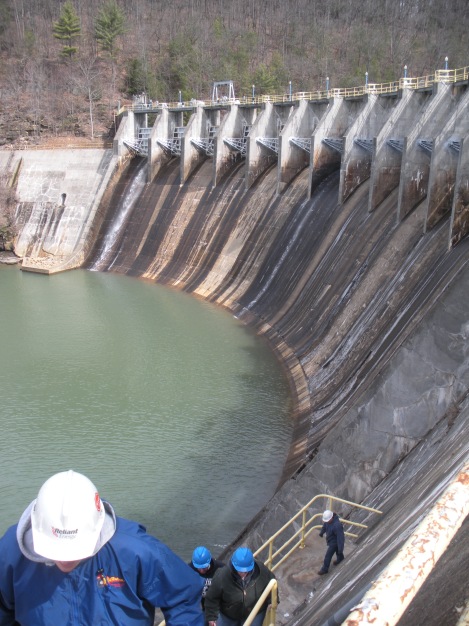 The Tionesta Dam, a compacted earth fill dam with impervious core, was the trip’s next stop.  This is one of the primary dams providing flood protection downstream to cities like Pittsburgh.  The dam was constructed to worst-case scenario based on historic area rainfall of 32 inches in 24 hours.  The emergency spillway, which cuts across a parking lot and campground, has never been used.  However, just weeks before our trip, the dam experienced its second highest pool level, just 6 feet shy of breaching the spillway.

The next day, the class visited the Kinzua Dam, a combination concrete gravity and earth fill structure almost 1,900 feet long and 179 feet above streambed at its crest.  By far one of the most impressive dams I’ve seen.  While no huge feat like the Hoover Dam, Kinzua Dam certainly is a creation of ingenuity.  The original design was for an entirely earth fill dam in a location where competent bedrock was located at depths of as much as 75 feet beneath glacial outwash deposits.  Later geologic surveys revealed a location where a shallow bedrock shelf existed across a portion of the valley.  This allowed the present-day dam to be constructed as an earth fill dam over the colluviums and outwash portion of the valley with a concrete section on solid bedrock across the remaining span.  This saved the project over $4 million (in 1957 dollars).  As with the Piney Dam, we were given a thorough tour of the dam, and even read piezometers in the lower gallery, at which Dr. Shakoor thought would be an excellent opportunity to give an impromptu assignment to calculate uplift pressure.

Our final stop was to the Austin Dam, almost 100 years after it failed.  This concrete gravity dam, constructed in 1909, all but wiped out the small town of Austin, PA when it failed in 1911.  The ruins of the dam now form the centerpiece of a memorial park.  Geology played a major part in the dam’s ultimate failure.  We learned that the dam foundation was taken only to a two foot thick layer of sandstone that sat on top of shale.  Because of this, high uplift pressures developed reducing the effective weight of the dam and a sliding failure occurred as the horizontal force of upstream water was able to move the structure.  While we have learned well enough the amount of force water can exert on a dam, it was humbling to see the huge pieces of the concrete dam turned at right angles and over 50 feet from their original positions.  This was not only a learning experience 100 years ago for dam designers worldwide, but for us today in demonstrating just how important geologic considerations are to the design, construction, and operation of dams. 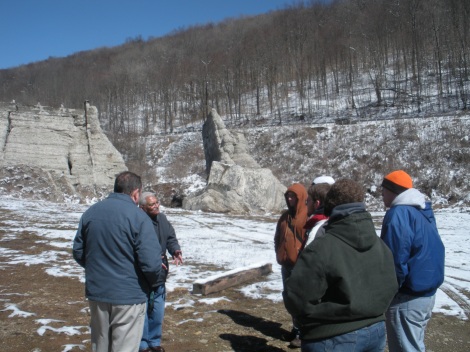 Dr. Shakoor lectures in front of the Austin Dam ruins.

Over a short weekend, Dr. Shakoor’s trip gives students the opportunity to visit the types of structures that we learn about in his class.  This trip allows us to see what geologic considerations were made in their design, placement, and construction outside of the classroom, reinforcing and expanding on what we’velearned.  While I may not have gone into too much detail here, it becomes clear that every engineering project—dam or otherwise—is unique.  Site geology is an important consideration and can serve to benefit or hinder a project.  This trip was definitely both fun and educational for us, even with some cold weather along the way.