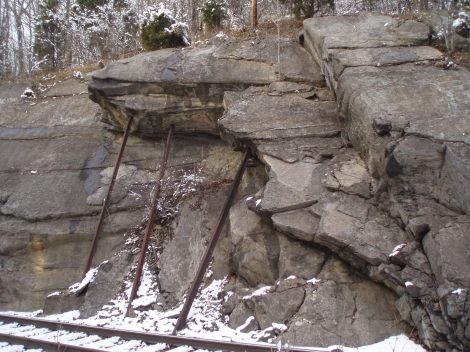 Not the typical Friday Photo entry, but one that may appeal to the engineering geologists out there.  Located in Cedar Bluff, Virginia, just East of U.S. Highway 460, this piece of engineering ingenuity resides immediately adjacent to the Norfolk Southern railroad.  While something like this wouldn’t necessarily pass by today’s standards, it has held up quite well for over 10 years so far, and shows no signs of failing any time soon. 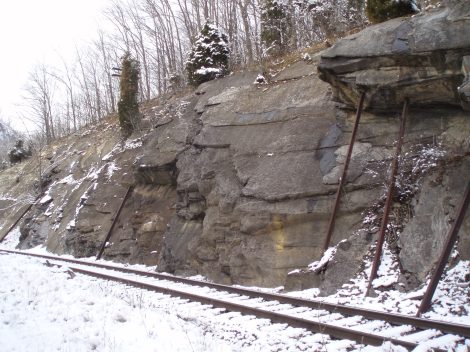 Railroad rails holding rock in place, some dowels are present about halfway up slope near center of image.

First, let’s explore what is wrong with this picture.  If you are an engineering geologist, you can immediately see a very problematic situation…the rocks here are dipping right towards the railroad.  Essentially, the the discontinuities within the rock mass, in this case bedding planes, serve as surfaces on which overlying rock may slide across.  When the friction between the rock above and below the discontinuity is overcome, a rock slide may occur, blocking the railroad.  During dry weather, the friction is usually enough to hold the rock mass in place.  However, in times of heavy rain or snow melt, water entering into the discontinuities causes an opposing pressure which results in a decrease in frictional forces and the failure of the slope.  Such was the case in the nearby Interstate 40 Rockslide last October.  This location is especially disastrous because this section of railroad is located on a turn through a large hillside cut.  In other words, the train conductor would have no way of knowing that large rocks are blocking the rail and would hit them at full speed, most likely resulting in a derailment. 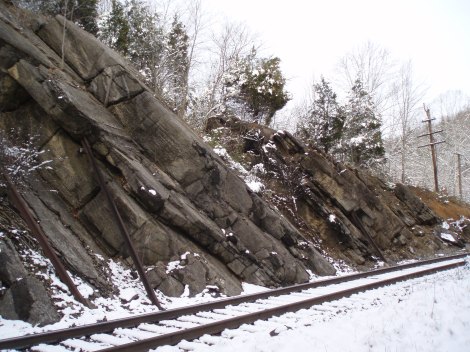 In an attempt to mitigate the problem, the railroad utilized what was readily at hand in order to keep rocks from sliding onto the tracks: they used sections of railroad track to prop up the rock masses which posed the greatest threat.  In addition to the rail sections, steel dowels were placed at right angles through the rock and across discontinuities.  These are few and very hard to see in the pictures, but they’re there if you look for them.  They’re not rock bolts, which are much more robust, but because of the angle they work pretty well.  While this seems precarious and should have been a temporary solution, the ties have been in place for a number of years with no signs of failure in the foreseeable future.  Rest assured that should there be reason to believe a rockfall may occur at this location, the railroad would have the issue remedied quickly…nobody wants a derailed train on their conscience. 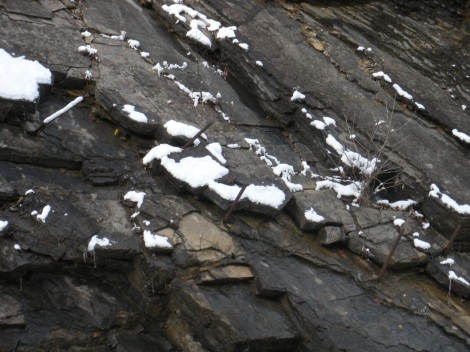 This area is a great location for a field trip because not far away is a road cut along US Hwy 460 which has created a world class exposure of Cambrian-aged carbonate and shale faulted by the St. Clair Thrust onto overturned Mississippian-aged shale.  That, however, is another story which I may come back to in the future.